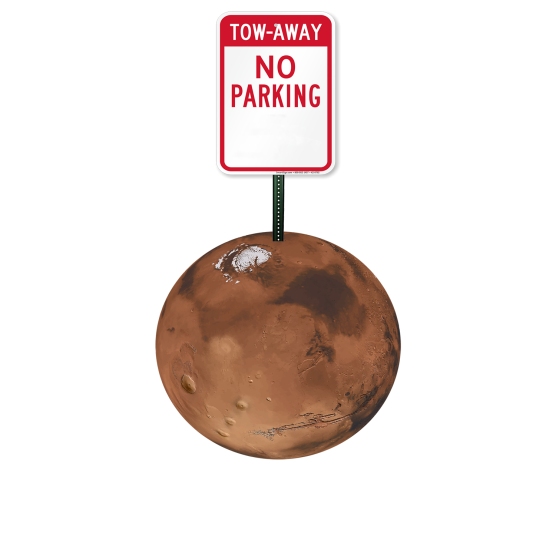 Are you ready to break the speed limit? Put on your seatbelt and let’s go to Mars. SpaceX recently tested their new Falcon Heavy rocket, however, launching a new rocket wasn’t enough. Elon Musk topped the technological sundae with an expensive cherry—a red Tesla 2008 Roadster. Because that’s what smart people do. 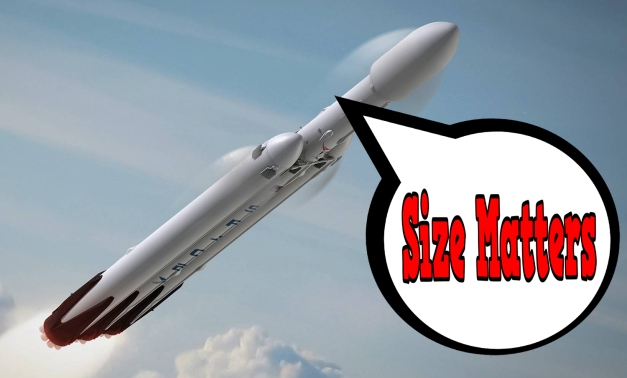 Elon’s favorite red Tesla toy was supposed to park somewhere inside the orbit of Mars, however, the trip has been extended. Indefinitely. The sporty roadster is peeling a strip of rubber across the solar system’s drag strip, but it probably won’t cruise beyond the Asteroid Belt.

My Rocket Is Bigger Than Yours

NASA doesn’t have any big rockets to play with. Sad. But true. Pathetic and embarrassing. But still true. NASA’s future partly relies on the ability to have access to affordable bottle rockets, especially if there are current plans to colonize Mars. Private companies (like SpaceX) could solve this problem, and Elon Musk certainly put his money where his mouth is. 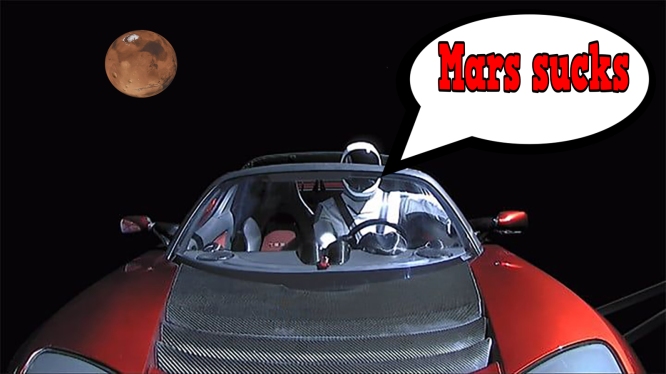 A totally real picture. Yup. No doubt about it.

Did Elon solve a problem and accidentally create another?

Earth’s orbit is cluttered with garbage: screws, specks of paint, used rocket boosters, and let’s not forget about top-secret spy satellites! NASA manually tracks celestial trash, that way a new satellite doesn’t collide into an old satellite. Because that would be embarrassing. Obviously.

A speck of paint travels faster than a bullet fired from Dirty Harry’s really, really big gun. Think about that. Elon’s favorite roadster had a stellar paint job, but are we to believe that a few flecks of paint won’t be doomed to orbit Earth, the Sun…or Mars? Come on.

NASA can’t track flecks of paint, just in case you were wondering. The paint could be the most dangerous thing on the car. Ultraviolet radiation (or dust) may cause paint particles to fade or flake apart. Perhaps Elon’s car is destined to leave behind a trail of colorful debris…kind of like a mechanical comet. Lovely.

Each paint particle has a chance to survive the journey toward Earth or the Sun, especially since Elon’s Tesla Roadster is currently not predicted to cruise beyond the Asteroid Belt.

Future planetary orbital dynamics may provoke Elon’s Tesla Roadster to wander around the solar system, though. A severe car accident probably won’t happen, either. The Asteroid Belt is quite spacious: two rocky objects can be separated by at least 600,000 miles (966,000 km).

While you’re thinking about flecks of paint, imagine you’re lounging inside an affordable space car. Relaxing. Sipping red wine. Sharing some laughs. Listening to some tunes. It’s the future. Nothing can wrong…BAM! The windshield cracks like a spider web and then explodes into a million pieces. All the passengers get sucked out the window. Investigators later concluded that a speck of paint caused the accident. Further analysis proved the paint was chipped from Elon’s favorite Tesla Roadster. Are you feeling lucky, punk?

Should space, the final frontier become a parking lot for the rich and famous? If Elon Musk was able to launch his Tesla 2008 Roadster into space, so can everyone else. If Joe Blow decided to stuff his favorite 1989 Chevy station wagon into a homemade cannon, and then blast the rusted shitbox past Neptune, so be it. Elon proved that anything is possible—including giving everyone the right to blast their automobile into space (as long as they have enough money, of course).

If Earthlings plan on colonizing Mars…is it such a good idea to launch our sports cars into space? I’ll leave that up to you to decide.

In Space, No One Can Hear You Sing

To make the situation slightly worse—David Bowie is blaring through the car speakers. “Starman” was commanded to perpetually repeat…until the end of time. But don’t worry. Elon’s shitty taste in music may cause the end of the world. No big deal.

Elon should have chosen Van Halen’s “Running with the Devil”. Alien invaders can’t compete with finger-tapping guitar solos, skin-tight leather pants, or a bad attitude. David Lee Roth has no problem using a probe, and he ain’t talkin’ about love, either.

If we’re gonna announce ourselves to the rest of the cosmos, we better make sure we’re not perceived as being a bunch of bi-pedal marshmallows. Salivating civilizations wouldn’t be able to resist wanting a piece of that tasty action. Stephen Hawking said so. Kind of. A delinquent kid could wipeout an innocent anthill, just with a magnifying glass, and just for the laughs. You get the picture. Hopefully.

The future is now. SpaceX lifted humanity to greater heights, and if planet Earth ends up destroyed by aliens, well…we know who to blame.

16 Comments on Elon Musk Launched a Sports Car Into Space