Prepare for a cosmic calamity—on January 31, 2018—a rare lunar eclipse will cause the world to explode into a million pieces. Just kidding. Do you want to see the 2018 Blue Blood Supermoon eclipse? Well, you better sip some coffee before the birds start chirping, because If you live on the east coast of the United States, you’ll only be able to observe the beginning of the lunar eclipse, which starts at 5:51 am (EST).

The Moon will not be visible during the entire eclipse. Sorry.

The rest of the world gets the cosmic shaft, too. Sort of. Great news! You’ll have a fantastic view of the eclipse…if you happen to be floating in the middle of the damn Indian Ocean. Well…that’s not really true. China will have a decent view, and so will Austraila, New Zealand, Russia, Canada…oh! Let’s not forget about Alaska.

When The Party Starts

** Click HERE and See When the Lunar Eclipse Starts **

Fantasy plots love to portray lunar eclipses as being quick and slick. Here’s a classic scenario: there’s a pretty damsel in some sort of distress. She needs help. Lots of it. Along comes, an armored stud with a very sharp stick. The town drunk told him about a dragon that awakens from hibernation during each lunar eclipse. Kill the dragon. Save the disturbed damsel. Ride off into the sunset. Mission impossible, right? Oh! The dragon can only be sent to hell during the eclipse. Have fun.

Here’s the real deal: a lunar eclipse usually lasts more than 3 hours. Yeah. I know. Sort of spoils the whole time-sensitive aspect of the fairy tale. Any armored stud would have more than enough time to execute a few dragons, and probably a handful of disgruntled ogres. 3 hours is a long time, of course.

You probably assume that dragons and ogres have nothing to do with lunar eclipses. Congratulations! You completely missed the point.

3 hours is a long time…that’s the point.

Now—will you be able to see the entire 2018 Supermoon lunar eclipse? Probably not. The Moon will either set below the horizon while the eclipse is occurring, or the Moon will be rising. That doesn’t mean the eclipse won’t last longer than 3 hours, though. It just means you’ll technically see less of the lunar eclipse.

If you’re able to observe most of the totality phase (plus the entire penumbra phase), then plan to be outside for at least an hour and a half. 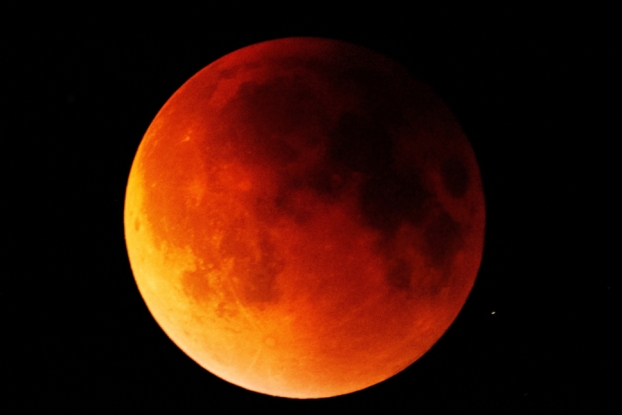 Be aware of trees and buildings, because the view might be clear as the Moon is rising, and then become obscured by a mountain or rude oak tree. If you plan on photographing or filming the event, please do your damnedest to make sure the horizon is not cluttered with trees or ugly buildings. Something bad may happen. Just saying. Or you can risk it. Your choice.

Oh! If you plan on photographing the Moon during totality, then expect the Moon to be relatively dark. Obviously. The lighting conditions are not ideal for slow telescopes. Expect to shimmy between different camera ISO settings. Clouds, haze and other atmospheric junk may hinder your ability to properly photograph the Moon.

Also, if you’re able to observe the majority of the 2018 lunar eclipse—be prepared ahead of time—or you might end up cursing at a dead camera battery. Find out when the Moon rises above the horizon, that way you won’t have to bumble around your local neighborhood. Click the link below this paragraph, input your specific location, and the rest works like magic.

** Calculate When The Moon Rises**

You’re probably wondering why Andromeda has her panties in a twist. After all…how many lunar eclipses occurred over the past few years? Please tell me. I lost track. Most of the lunar eclipses were of the ‘super variety’, but this year’s lunar eclipse is a little different. A ‘Blue Moon’ usually refers to the second full Moon in a particular month, but that definition is technically incorrect. Trendy. Still incorrect. The real definition involves the intricacies of astronomical seasons, but we don’t have to go there. Unless you want to.

Mix all that up in a blender, pour it into a tall glass, and you got yourself a Super Blue Blood Moon eclipse. Tasty.

Needless Scientific Fact of the Day

Perigee: the region in the orbital plane of the Moon or astronomical object at which it’s closest to Earth

You’re now ready to survive the lunar eclipse, my friend. Don’t humiliate yourself, and make sure all the camera batteries are fully charged. Be prepared. Watch out for dragons.

Since you read this article and realized the world won’t explode into a million pieces, you now have plenty of moolah to waste. Send your friends, family, and enemies a stationery card—featuring a full Moon portrait. And that’s about it. Each order contains 3 cards. You’ll also receive 3 envelopes.