Every educated photographer on planet Earth is familiar with the Golden Hour. Shhh…come a little closer…I’m gonna whisper a top secret in your ear…just kidding! I’m gonna tell you a secret but forgive me if I don’t whisper in your ear (you’ll have to pay me extra).

The golden hour gets all the hype, but did you know there’s another hour? Yup, it’s true! This special time of evening is called the “blue hour”. Sounds pretty sweet, huh?

There are a few cosmic events that can be seen during the the blue hour. Planets are usually visible, which means you’ll most likely see planetary conjunctions.

Venus, in particular, can be seen well before twilight. Mercury is famous for being a pain in the ass to observe. The two points of light are…wait…do you want to take a guess?  Yes! Venus and Mercury is correct! You’re a damn genius. Why are you reading this article? Don’t answer that question. Please.

Look for Venus or Mercury during the blue hour. Trees and shit may get in your way, though. Scout a decent location ahead of time. Watch out for trees.

Secret Hint: silhouettes are more prominent against a blue sky.

The Moon also comes out to play during the blue hour. Astronomical conjunctions between the Moon and planets are fairly common. Don’t be lazy. Try to discover interesting foreground objects. A few points of light in the photograph may not have much visual impact, and the objects won’t have any context. The human brain loves context. If a photograph contains familiar foreground objects, then our brains will interpret the scene as being more natural. Now…that hypothesis can be complete bullshit, but it makes sense, right? Thank you.

Secret Hint: Light pollution tarnishes the night sky, and it’s not very pretty. The last remaining light of the day will often overpower local street lamps (if they happen to be turned on). Use that to your advantage.

The absence of foreground objects may cause a sky photograph to appear flat. Or boring. Take your pick. There are a variety of reasons why the photographic frame should be filled, but try to be conscious of what’s actually in the photograph, or you could end up kicking yourself in the ass. Sloppy framing degrades the quality of an image, or unexpected objects can potentially ruin the composition.

The tree in the middle of the photograph would have made an excellent silhouette against the blue sky. There’s just one problem…the bottom corners of the frame are cluttered with distant trees, which reduces the foreground tree’s visual impact. If the image was taken 2o minutes later, then it would have been ruined by light pollution.

If the astronomical seeing is relatively clear, then it’s possible to see earthshine during the blue hour. The Moon needs to be in a crescent phase (waxing or waning). Visible lunar terrain on the Moon’s night side is an unusual phenomenon. Sunlight reflected off the Earth’s surface is able to illuminate the Moon’s night side, but the weather can hinder your ability to see earthshine, so it may not be visible all the time.

Although the crescent portion of the Moon is overexposed, subtle detail within the Moon’s night side is distinguishable. Tycho Crater and other features are somewhat apparent, while the lunar terrain would have ordinarily been smothered by darkness. Earthshine is more apparent during the blue hour, but it can also be seen at night.

The blue hour (or astronomical twilight) doesn’t last too long. And to makes things just a little more confusing, the blue hour only lasts about about 40 minutes. Don’t waste precious time watching your favorite HBO special. You have to be ready. Seasons and location will influence when the blue hour occurs, and how long it will last. The animated GIF is a time-lapse representation of the blue hour’s evolution.

Astronomical twilight occurs AFTER the Sun sets below the horizon, and it’s the last light to linger in the sky before nighttime begins (you can also observe the blue hour before the Sun rises). 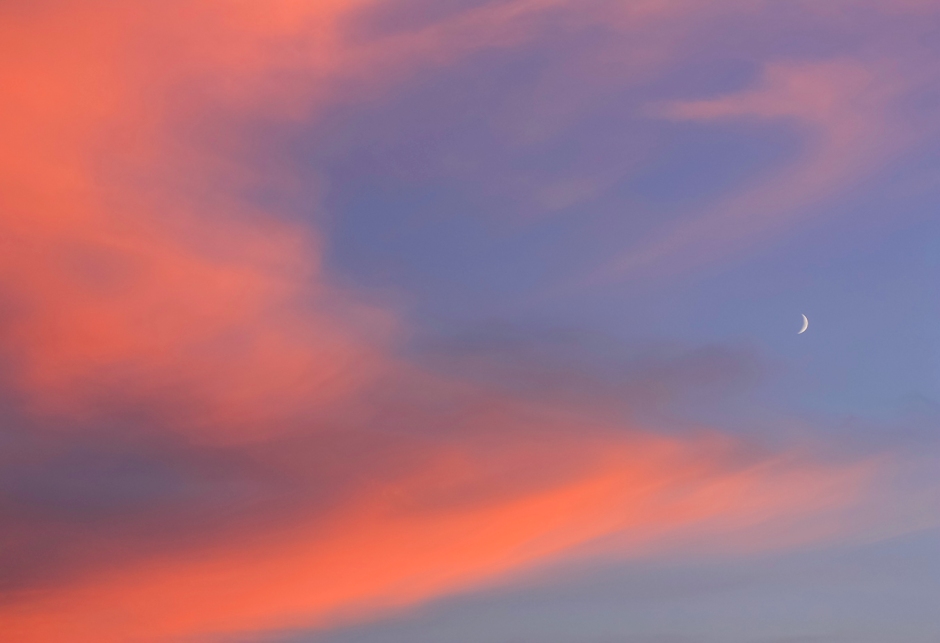 Astronomical twilight hours can be predicated, though. Click here and input your specific location stats.

** Things To See During The Blue Hour **

If you want to plan your next blue hour photography session, then visit the websites listed below.

The article is finished. You can leave now. The show is over. What’s the matter? Oh…you still want me to whisper in your ear, huh?
That’s okay. Understandable. But there’s always next time. Go brag to your friends about the intellectual journey you accomplished. Spread the secret and tell them about the blue hour…