Did anyone see the Perseid meteor shower?

You know…I had great expectations.

Shooting stars fell from within my wrinkled mind. Streams of golden light dripped out of a stellar studded night sky and exploded into a kaleidoscope of burning colors. Yeah. I imagined the night sky would rain iridescent comet crumbs.

**SPOILERS** None of that happened and I didn’t photograph any shooting stars.

Sure, sure, sure—I witnessed a handful of burners. Not much. One was considerably bright and temporarily seared the starry sky. The rest were mere firecrackers.

The meteor shower turned out to be a dud and I accidentally looked into a demon’s eye. Damn it!

The Demon Star looked at me while it performed its disheartening disappearing act. Algol blinked out of existence, leaving behind a void of black space, then a hazy glow returned and snapped back into a pin-point clarity. Algol ‘blinked’ about 4-5 times—each cycle chipped away at my wilted mountain of sanity. 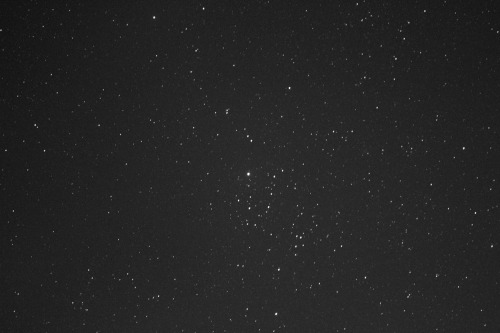 Algol is the bright star toward the center of the above photograph.

My camera was pointed toward Cygnus while this event occurred, so I was unable to record Algol’s blinking. Variable stars have predictable habits and Algol will surely blink again—it’s only a matter of being prepared and having the will to stare into a demon’s eye.

Since the show turned out to be a lackluster performance, I gave my attention to a solo artist, located about 2.5 million light years away.

I’m talking about the Andromeda Galaxy! You can count on Andromeda to put on an unforgettable show and you know what? She doesn’t charge for tickets!

Let’s see what else…

Do you remember when I said something about not being able to photograph any shooting stars?…

Sorry! Haha! You forgive me, right?

After Algol performed its vanishing act, I aimed my camera at the Demon Star and programmed it to blast-off a series of timed exposures. None of them turned out to be of any interest…

Do you see that green streak? That’s a Perseid! I almost deleted this image—the streak looks like a satellite—in a monochrome photograph. But not exactly. I restored the photograph’s color, which made the Perseid become more obvious. The image above was taken with a Canon EF 100mm Macro USM lens and a Canon Rebel T5i (APS-C sensor), so the angle of view was quite restricted (24º)—ensuring a shooting star would never blaze across the frame.

10 Comments on Night of the Winking Demon