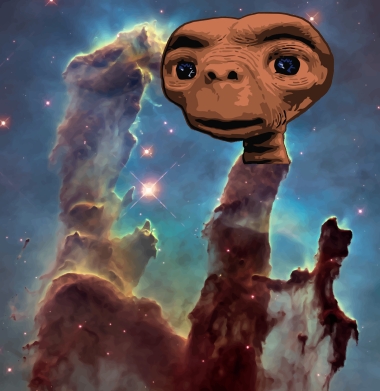 Let’s get to the point, shall we? Aliens have no business perusing a rock that swings around a G-type middle-aged star. Think about it: what the hell does Earth have that’s worth traveling trillions of miles / kilometers for? And don’t say our charming, good looks.

As a matter of fact: If you said our charming, good looks, my friend—that would a more valid excuse than water.

What’s another top excuse as to why aliens are loitering around our planet?

Sorry ladies and gentlemen, but if aliens are willing to bust a move for a handful of light years just to visit a space rock; do you honestly think they’ll choose your anus over mine? I highly doubt that. Since my anus is still intact, well, guess what? No aliens

Yup—that means anyone who claimed to have been molested by an alien is a liar. I hope.

Man, I don’t know about you, but if I had a spaceship, the last place I would want to visit is a shithole called Earth.

Hey! Do you enjoy sunbathing at your local dump? Do you oil your pale ass hide…strip off your skivvies and lay a towel next to the non-biodegradable receptacle? My, my—I’d travel 3.5 light years for that opportunity. Yup. I sure would.

Yeah. I would be zipping around the cosmos like a madman, pedal to the metal, floorin‘ it…you get my drift? Earth is the kind of place I would go to if I were extremely intoxicated on psychedelics and haven’t eaten the past 28 hours. I would stumble into some low-class diner, order a bacon cheeseburger, eat it, and then blast off never to be seen again.

Would I leave a tip? Hell no! Rocket fuel is expensive.

You know what else I would do? I would recommend allll my little alien buddies to never visit Earth. And you know what? They would listen to me.

Keep in mind when I make a statement like: “Aliens are not visiting Earth”—that doesn’t mean I don’t think aliens exist.

Of course aliens exist! By “they”, yes; I’m referring to ET. You would have to be one conceded individual to think God only sprouted life on some weak-sauce rock that orbits some pathetic star.

HA! Got you again! No, not the alien part—the part about God sprouting life—who would believe something silly like that?

You bet your ass there are aliens.

Our days of ignorance lasted until some point in the 1990s. Ever since, astronomers have been discovering planets at a…dare I say…astronomical rate.

Hey. Just because there’s a high certainty that aliens exist doesn’t necessarily mean they actually exist. Sure. Sure. There’s a possibility we could be the only nasty creatures on the cosmic block. After all, I can’t box up an alien head and give it to you and say: “surprise!”

Because that’s what humans do. We decapitate things, and then stuff the head in a gift wrapped box.

See? That’s part of the reason why no sensible alien would ever shack-up on a rock like Earth. Would you buy a plane ticket, button up a nice Hawaiian shirt, and go frolic on a beach filled with a bunch of potentially murderous ape-like creatures? Sounds like a killer time to me.

Listen. I don’t want some smart-ass telling me that I contradicted myself by stating a potential reason why an alien would make a pit stop on Earth. I still believe aliens haven’t molested any cows, but we already explored that topic, so I won’t go there. Again.

In case you’re a high-grade smartass…you might be wondering: How would an alien eat at a diner without freaking out the local patrons?

Gee. Or how ’bout a magic wand that’s been engineered by a masterful…engineer. Sure, Sure! All they need to do is press a button labeled ‘Appearance Modification‘, wave it above their head, and voilà! Presto! Abra Cadabra! They morph into a temporary replica of a human.

Good enough for you? Good.

I can imagine some interstellar explorer, you know, someone who has left skid marks across the whole cosmos, standing on the surface of Earth and saying: “Yup. What a shithole.”

I’m sure you’re thinking something that goes a little something like this: “But, FlyTrapMan. You have seen a UFO with your own two eyes! If anyone should believe in aliens—it’s you!”

Yes. I did see something in the sky one fateful afternoon. Something.

There’s no denying the memory burned into my brain. As I’ve grown into the wise man that I am today, I understand that I witnessed something. That something doesn’t necessarily have to be an alien craft. It could have been a top-secret, military plane that just so happened to levitate for a few seconds. Or perhaps it was just a big-ass kite.

I could go on, but I think you understand my point.

We all see things. The only difference is whether or not you’re willing to impose your own version of reality against what actually occurred. This happens all the time: Someone peeks their head out a window and sees an extremely bright point of light. Guess what? Aliens.

The planet Venus is never an acceptable answer because they already decided for themselves what they witnessed.

If one thing is for certain; the sky is full of all sorts of junk.

Am I forgetting Something? Probably. The next time someone asks you if aliens are visiting Earth…

…Clear your throat and ask: “Would you like to hang out at your local dump?